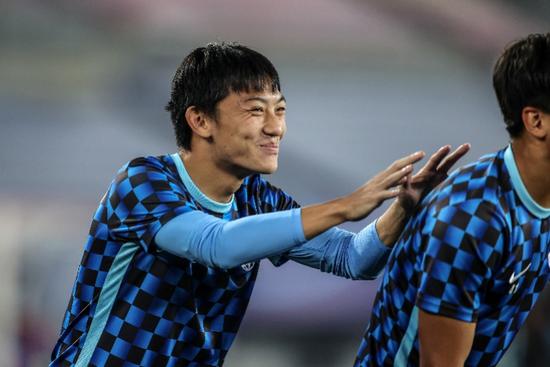 On September 27, Dalian People's Team player Tong Lei was training before the game. Since then, he has also been selected to the national team for the first time. Xinhua News Agency

This year's U23 policy requires that one U23 player is always present, which gives the coach more room for adjustment. In fact, under the special competition system and intensive schedule, there are more substitutions, and many coaches are very willing to give young people opportunities. In order to cope with policy requirements, the number of transitional substitutions has been greatly reduced, and young players have also received more quality appearances.

Dalian is the team with the most minutes of U23 players in the first stage. They have introduced several young players such as Tong Lei and Lin Liangming this season. Benitez has also given them enough trust. Tong Lei played well both offensively and defensively, sending out 3 assists while also contributing the most 37 steals in the league. Lin Liangming also scored his own Premier League goal.

Also getting the first goal of the Chinese Super League was Guangzhou R&F’s Huang Zhengyu, who scored a long shot in the game against Evergrande. After harvesting the best rookie in the 2017 season, Huang Zhengyu experienced two seasons of downturn. This year, he changed to playing as a midfielder. He has made significant progress in passing and dribbling, and has recovered his best rookie status.

The U23 players of Shandong Luneng, a major youth training player, ranked last in terms of playing time, but the performance of the teenagers was very eye-catching. Guo Tianyu, who is 1.92 meters tall, left a deep impression on people with an exquisite through pass in the first round of the league. In the fourth round, he scored the only goal and gave the defending champion Evergrande the first defeat of the season. Duan Liuyu, who has scored two goals, has already scored two goals this season and has played better than last year.

On September 24, Shandong Luneng Taishan team player Guo Tianyu shot in the game. He was also selected for the national team for the first time. Xinhua News Agency

In addition, several teenagers who changed the court for more playing time also got their wish. Chen Pu from Luneng youth training scored two goals in Shijiazhuang Yongchang, and Wen Jiabao and Zhou Junchen, who had the same idea as him, also sat on their own Stabilized the team's main position.

Due to the particularity of the goalkeeper's position, many coaches will try to use U23 players in this position in order to send stronger players in the frontcourt. Guo Quanbo of Beijing Guoan is the first U23 player to get a chance to play. This season he and Hou Sen are competing for the starting goalkeeper position.

In addition to him, other goalkeepers this season have begun to gain the starting position with their strength. In the third round of the league, Hebei China’s goalkeeper Chi Wenyi made a mistake and threw the ball into his own gate. This gave 23-year-old Bao Yaxiong a chance to prove himself. After losing to Beijing Guoan, he helped the team zero TEDA and became a team since then. The main goalkeeper.

On September 4, Guangzhou R&F team goalkeeper Han Jiaqi (left) made a save in the game. On the same day, in the ninth round of the first stage of the 2020 Chinese Football Association Super League (Dalian Division), Guangzhou Evergrande Taobao team defeated Guangzhou R&F Team 2-1. Issued by Xinhua News Agency

Guangzhou R&F’s Han Jiaqi has been the team’s main goalkeeper since the preseason. He made the most 46 saves in the Super League in the first stage.

After several years of adjustments, the U23 policy has finally formed a more reasonable form. Young players can get playing time that matches their own strength, so that they can better exercise and grow. This is also what this special Super League season brings to Chinese football. One of the contributions.